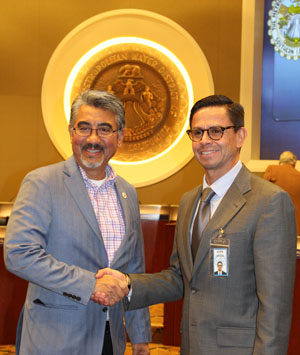 City of Fullerton appoints Ortega to MWD Board

LOS ANGELES–(BUSINESS WIRE)–Feb 12, 2019–Three new directors representing the cities of Fullerton and Santa Ana, and the Inland Empire Utilities Agency were seated today on the board of directors of the Metropolitan Water District of Southern California.

Adán Ortega, who owns a Fullerton-based public affairs firm, will represent Fullerton on Metropolitan’s 38-member board. He replaces Peter Beard, who served since July 2014. Santa Ana City Councilman Jose Solorio will represent the city, replacing Michele Martinez, who joined the board in March 2015. Jasmin A. Hall, a retired Southern California Edison employee of more than 27 years, will represent the Inland Empire Utilities Agency, succeeding Michael Camacho, who was named to the board in February 2011.

Ortega has worked in government relations for 30 years and has helped lead efforts to bring technical assistance to small community water systems in disadvantaged communities around California. He served as Metropolitan’s vice president of external affairs from 1999 to 2005.

Prior to joining Metropolitan, he served as Secretary of State Bill Jones’ chief deputy, and as assistant general manager of both West Basin and Central Basin municipal water districts. In 2013, he was appointed by former Gov. Jerry Brown to the California Water Commission, and by former Gov. Arnold Schwarzenegger to the California State Board of Food and Agriculture, where he chaired its water committee from 2005 to 2012. Ortega has bachelor’s degrees in English and history from Whittier College.

The Metropolitan Water District of Southern California is a state-established cooperative that, along with its 26 cities and retail suppliers, provide water for nearly 19 million people in six counties. The district imports water from the Colorado River and Northern California to supplement local supplies, and helps its members to develop increased water conservation, recycling, storage and other resource-management programs.